The Victorian Department of Jobs, Precincts and Regions engaged Paper Giant to co-design a biosecurity direction statement for Victoria that all stakeholders could stand behind. 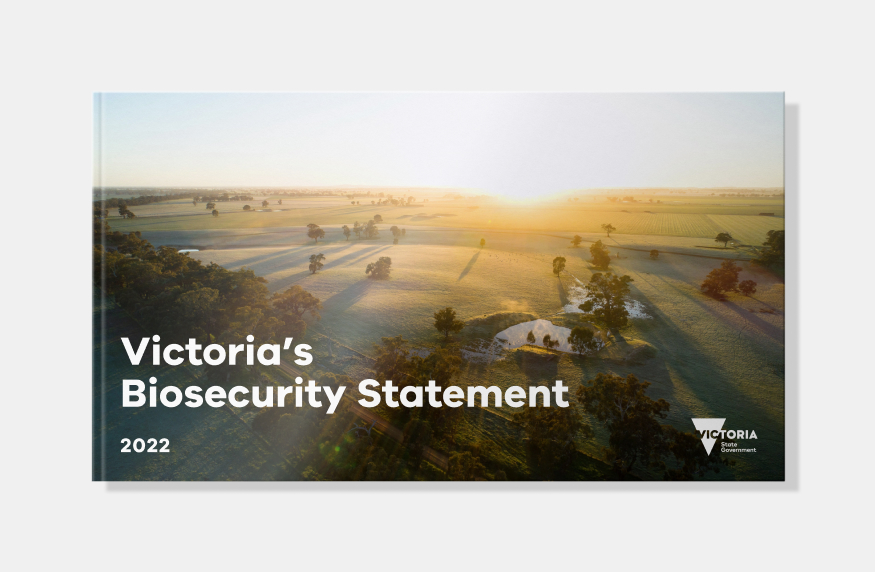 A foundation for a new strategy

Biosecurity is a collective effort to prevent and manage the harms caused by pests and diseases, and the impacts they have on what we value most. Biosecurity is a key priority for the Victorian Government, and success requires ownership and cooperation amongst all Victorians, from various branches of government to Traditional Owners, farmers, industry groups, government agencies, councils, environmental interest groups and individual residents and visitors across Victorian communities.

As the Government began work on a new biosecurity strategy for 2023, and on legislative reform for 2025, it became clear that a unifying narrative for Victoria’s plant and animal biosecurity system was missing. They engaged Paper Giant to bring clarity to the roles of Agriculture Victoria and other biosecurity stakeholders through the development of that shared story.

This statement is a game-changing approach to biosecurity that focuses on every single Victorian to play their part and ensure our communities, environment and economy remain healthy, safe and resilient.

Back to biosecurity basics

The new Biosecurity Direction Statement was developed as a foundational document for future strategy and legislation, and also because biosecurity as a concept is not well understood by all Victorians.

We facilitated industry experts and stakeholders to articulate the fundamentals of biosecurity with short, plain-language answers to questions like ‘What is biosecurity?’ and ‘Why is biosecurity important?’. The Statement we co-created also includes short, real-life examples of biosecurity in action—for example: ‘A Wimmera farmer sees that a neighbour has not treated prickly pear and stops by their house to talk about it.’

It is vital that all Victorians understand the role they play in ensuring the health of our land and water, and everything we rely on our biosecurity for. The Statement helps to break down the mystery of biosecurity and allow anyone to engage with it.

Broad engagement on a tight schedule

To maximise engagement and value within the Department’s timelines for delivery, we designed a series of carefully-designed sprints to enable meaningful participation from a broad cross-section of stakeholders in a short time.

We also conducted seven leadership interviews, ten workshops with a wide array of stakeholders, and sent a survey to over 300 people across the biosecurity system. Our approach focussed on embracing a wide diversity of perspectives, and fostering conditions for respectful listening, thoughtful reflection, and productive engagement.

A statement that can move you

We chose to use emotive, evocative and inclusive language throughout the future Statement to ensure that anyone across Victoria’s biosecurity system could understand it, get behind its aims and see themselves in it.

Our skilled information and communication designers made use of powerful local photography to maximise the impact of the Statement and to help convey what is at stake when we talk about protecting Victorian ecosystems and agriculture.

Victoria’s Biosecurity Statement shows the important role all of us play in protecting Victoria from the impacts of pests and disease.

Collecting data and knowledge to improve conservation in Australia

Enabling innovation in the Australian energy sector through systems design