Finding a better way to fix a fine

We partnered with the Moonee Valley Legal Service and Legal Aid NSW to improve financial and legal outcomes for people in the community. 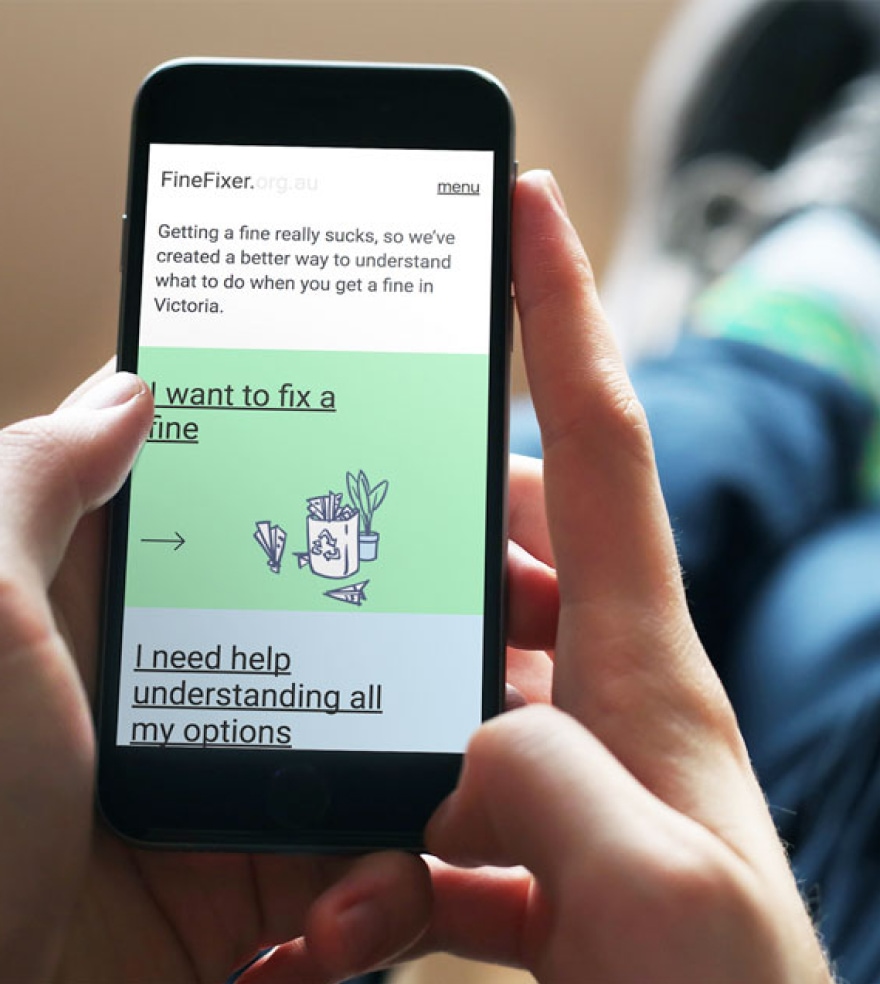 Finding a better way to fix a fine

Fines, and the processing and handling of fines, is a major issue in Victoria. More than than five million fines are issued per year for things like traffic violations, parking fines and travelling without a ticket on public transport.

The fines system was created with a strategic goal: to deal efficiently with minor criminal offending, where the offence isn’t so serious that it’s worth getting a court involved. That works for people who can pay - it’s a minor inconvenience and works as a deterrent. But while fines can be a useful deterrent mechanism, fines have a disproportionate impact on vulnerable people, and over $1.5 billion in fines goes unpaid each year.

There are provisions in the law to allow people to contest fines if they were issued in unreasonable circumstances (for example, if you receive a toll road fine whilst fleeing family violence, or a failure to vote fine whilst homeless). This infringement system is complex and bureaucratic, and people disputing fines that were issued in unreasonable circumstances is a major source of bureaucratic cost on the government, as it often costs more to recover the fines than the value of them. It also creates pressure on the legal help sector, taking up a lot of time and resources where both are in very short supply.

FineFixer is a digital tool, a process, and a free service, to help those with the capability deal with fines in a timely manner, and others who need more help to be directed to the correct help the first time around.

The FineFixer concept and business case was originally developed by a team of RMIT University students. Paper Giant’s role was using Human Centred Design to turn a conceptual idea into a fully realised digital product.

We designed collaborative workshops with community legal centres, legal aid, and financial counselling services to build a human-centred understanding of the problems and complexities faced within the Victorian fines system.

Informed by our user research, we designed and developed a responsive website that serves as both a self-help tool and a central resource for fines information. Designing for usability, we used digital prototypes and user testing to make sure we met the needs of both the community and the community legal sector.

We launched the original FineFixer in August 2017.

Fines, as well as understanding what to do with them, are just as much of an issue in other states throughout Australia. In 2020 Legal Aid NSW asked Paper Giant to build a NSW version of the FineFixer website so that their clients could better understand the NSW fines process.

We ran an initial workshop in Sydney with Legal Aid lawyers, which allowed us to map the first iteration of new flows. Over the following weeks, we worked closely with Legal Aid to iterate these. By collaborating with subject matter experts across different fines specialties, we were able to create flows that made the fines process and outcomes clear to our users, while also being legally correct for the NSW context.

We went straight from UX into build, leveraging the existing codebase and using this as a testing prototype. Doing so allowed us to test the actual website, rather than throwaway design mock-ups or prototypes.

We tested the NSW flows remotely with users, which allowed us to speak to people we wouldn’t ordinarily be able to, as the barrier of having to be Sydney based was removed.

After testing, we iterated on the build and ensured it was set-up in a way which allowed both us and the client to make changes to the flow logic directly in the CMS. We also ran remote CMS training with Legal Aid NSW to equip them to take ownership of the NSW branch of FineFixer.

In addition to the new set of flows, we also refreshed the look and feel of the FineFixer website. We updated illustrations and polished typography, all while keeping the core brand elements consistent so that the website felt like the same FineFixer our users already know.

Throughout the project we iterated our process and deliverables on the fly, in order to support the needs of the large organisation that is Legal Aid NSW.

Interested in how we could help launch FineFixer in your state?

Making it easier to apply for the Disability Support Pension

Supporting people with disability in the criminal justice system

Enabling conversations about the ethics of facial recognition technology