Centre for Culture, Ethnicity and Health

We helped the Centre for Culture, Ethnicity and Health produce a set of educational comics to support the health and wellbeing of people from refugee and migrant backgrounds during the COVID-19 pandemic. 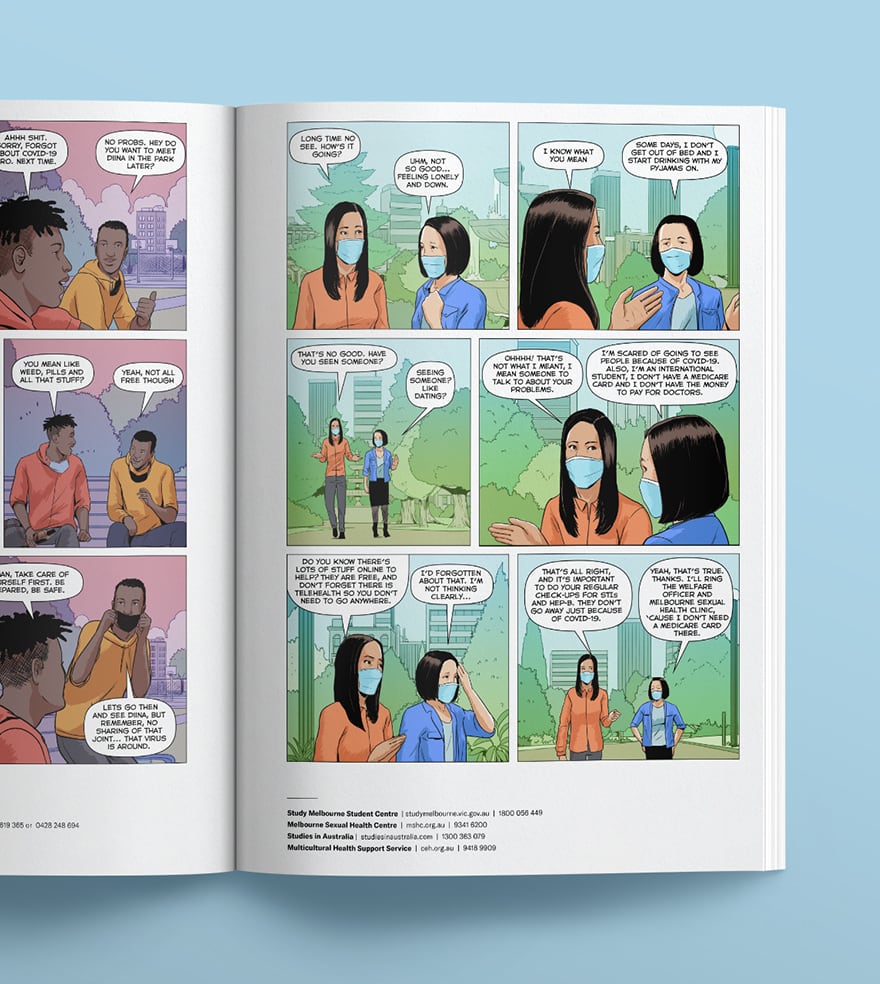 Adapting to the new normal

CEH engaged Paper Giant to create a series of comics to support and inform refugee and migrant youth. The eight comics focus on sexual health, sexuality, and social behaviour within the context of the pandemic and its restrictions. The series is titled Anti-Viral – Covid Safer.

The idea was inspired by previous work CEH and Paper Giant have done together. In 2016, we helped CEH expand how they deliver educational resources on complex, sensitive topics around sexuality and sexual health.

We needed a research approach that would provide a safe and relatable way to to ease young people into conversations about unsafe sex, teenage pregnancy, domestic abuse, cross-cultural relationship and LGBTI issues. We used storytelling in the form of visual conversation prompts to facilitate these discussions. This engaging approach helped identify missing gaps in important areas of wellbeing and validated storytelling as an effective teaching tool.

These visual stories evolved into a series of highly relatable comics as a new way for CEH to deliver educational resources to refugee and migrant youth. After the success of that project, we used a similar approach for the Anti-Viral – Covid Safer series.

Each comic is a standalone resource, but they can also be used as discussion tools to engage young people in important discussions about their lifestyles, the choices they make and ways to stay healthy.

Getting the comics right

The comics and scripts were co-designed with the young people they are intended for. As Melbourne went into a second and more restrictive lockdown, feedback throughout the process was critical to getting the comics right.

In particular, it was crucial to show masks being worn and the experience of social restrictions. This process of testing ensured that comics are an accurate reflection of real experiences, portraying the choices and issues that these young people may be facing at this time.

Making them accessible and appropriate

To bring these stories to life, we were very fortunate to work with well known Melbourne-based illustrator (graphic artist), Guy Shield.

Guy has an appealing and detailed approach to contemporary image making. He uses colour, light and shape to tell interesting, nuanced stories with expressive and relatable characters.

Each of the eight scripts portray unique characters of varying ethnicities in different contexts and scenarios. To differentiate the messages within each script, Guy created discrete colour palettes to deepen the connection and understanding a young person may feel to the story.

The characters were carefully created to reflect the breadth of the refugee and migrant community of young people living in metropolitan Melbourne in 2020.

The comics are available as resources for anyone to use and can be found on the Centre for Culture Ethnicity and Health’s website. They were printed out as comics and posters and shared through a social media campaign. This approach amplified access to young people and meant that they could also engage with the information privately or in dialogue with their peers and trusted people in their communities.

Engaging an organisation to create their strategy for cultural safety

Building a better portal for Medibank and specialist providers